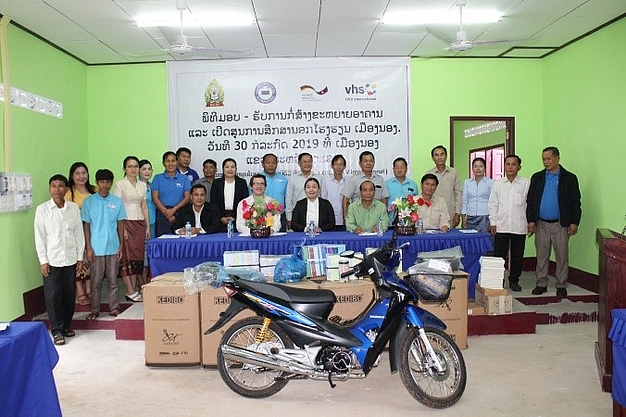 Besides the opening ceremony, there has been an exhibition in order to show the products, such as agriculture products and handicraft, made by the villagers with the support of the CLCs.

Additionally, the District Governor has given an award to the Regional Director of DVV International, as well as, to other officers.

To make the event more meaningful, the participants have shared their experiences and suggestions about the management of the NFEC in order to support this center to work efficiently therefore the people in the district are provided with a good service.

Since 2011, DVV International Regional Office in Vientiane has supported the constructions of 10 CLCs in Nong District and still continues its support by promoting the activities in these CLCs.

Nong District is one of the poorest districts in Lao PDR and the poorest one of Savannakhet Province surrounded by a lot of mountains. The distance between the province municipality and Nong is about 256 km. The whole district covers 1.824 ​square kilometers which makes up 8,85 % of Savannakhet Province. Nong District has 69 villages with a population of 29.748 people of which 14.609 are female. The district includes villages which are focal points of development. Nong District borders Hua district of Vietnam in the east, Phin district in the west, Sepone in the north and Ta Oy district of Saravan province in the south.