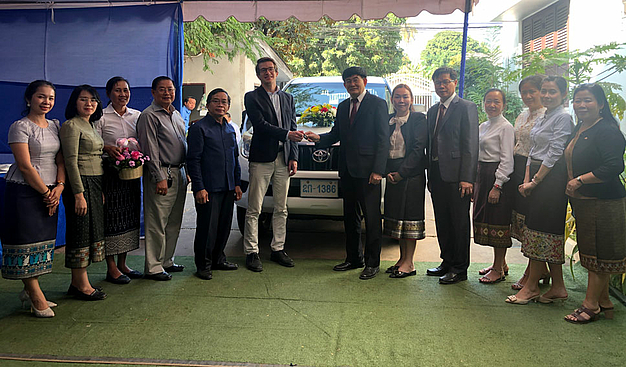 Since 2009, DVV International, the German Adult Education Association supports the establishment of sustainable structures for adult education and lifelong learning in Lao PDR. For many years, the Department of Non-Formal Education (DNFE) in the Ministry of Education and Sports has been its main partner. On 26th January 2020 DVV International and the DNFE came together in a handover ceremony at the DVV office during which both sides pledged their commitment to the mutual objectives and during which 2000 diaries, 1300 calendars, 400 DVV newsletters and a project car were handed over to DNFE. The handing over certificate was signed by Ms. Philany Phissamay, Deputy Director of the Department and Dr. Johann Heilmann, Regional Director for Southeast Asia of DVV International.

In 2021, DVV International enters a new funding phase which permits rethinking and redesigning its approaches together with all partners that include, besides DNFE, the Department of Technical and Vocational Education and Training in the Ministry of Education and Sports, the Faculty of Education of the National University of Laos, the Non-Formal Education Development Centre and the Rural Development Agency. Particular emphasis will be on the implementation of the Lifelong Learning Decree which had been approved and launched by the Lao Government in 2020. While admitting that the approval of the Decree was only the beginning of a much longer process, Dr. Johann Heilmann expressed the hope that the decree will “bring about a change of mindset in the education sector which allows for more exchange between the different areas of education, the recognition of prior learning from non-formal education and informal learning and a new learning culture that enables Lao citizens to learn in many different places and in many different ways.”

The ceremony was preceded by a half-day workshop on the empowerment of women through adult and non-formal education. Two research studies were presented that focussed on the feasibility of income generation for women in Community Learning Centres (CLCs) in Nong and Sepon District in Savannakhet Province, DVV International’s pilot districts, and the barriers of women to non-formal education. In the coming three years, DVV International and its partners seek to develop tailor-made approaches to address these identified barriers.

Both Ms. Philany and Dr Heilmann expressed their appreciation for a partnership based on trust and confidence. The ceremony was also attended by the Deputy Minister of Education and Sports, Dr Phout Simmalavong and the German Ambassador Jens Lütkenherm. Dr. Phout thanked DVV International for its continuing support in this important field of education while Mr Lütkenherm highlighted the important role of DVV International’s work in the context of German development cooperation.

Women on the barriers of NFE & ALE in Laos